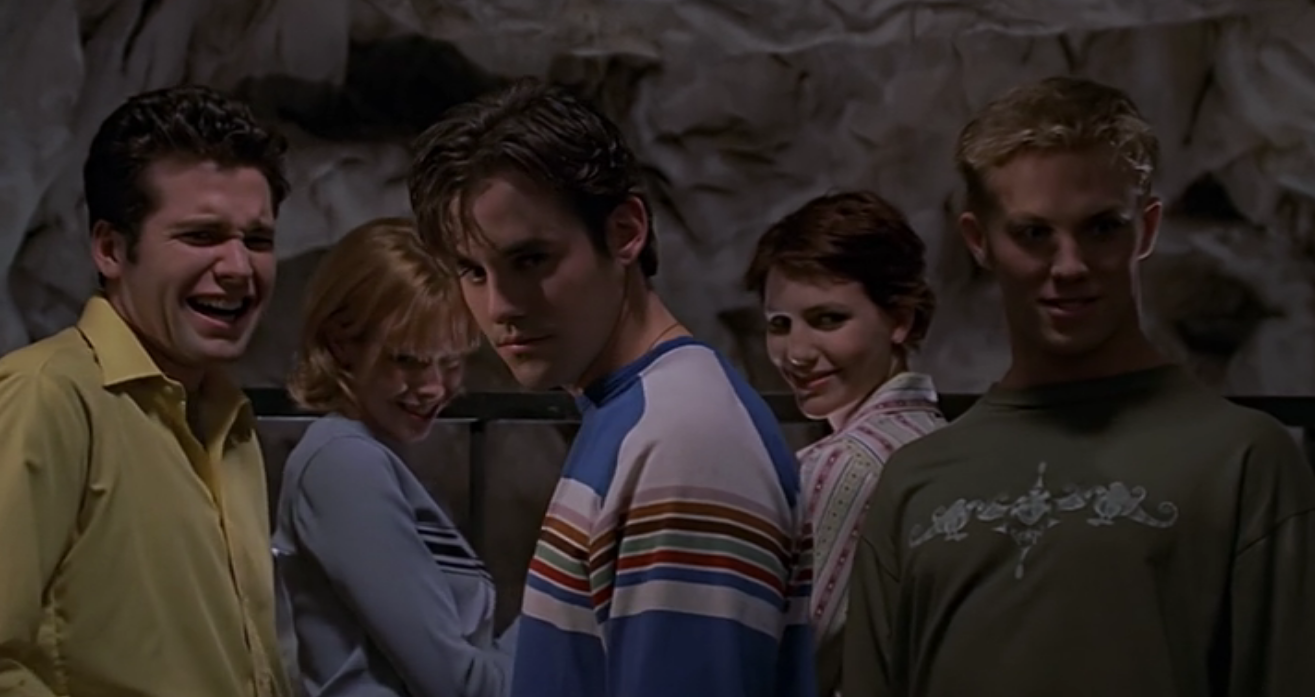 Well every school has them. So you start a new school, you get your desks, some blackboards and some mean kids.

You took a bath.

Yeah I often do, I’m actually known for it.

And there’s a noticable change in both clothing and demeanour.

And well otherwise all his spare time is spent lounging about with imbeciles.

Why couldn’t Xander be possessed by a puppy or some ducks.

Come on Slayer, I like it when you’re scared. The more I scare you, the better you smell.

It shouldn’t be too hard to find a new principle, unless they ask what happened to the last one.

Shoot me, stuff me, mount me.

The gang is on a school trip at the zoo. Buffy is verbally bullied by 4 other students who seem to strike a nerve with her. The group move on and start picking on another student. It’s obvious the boy gets picked on a lot. After not ratting them out to their principle, they take him with while they explore the hyena house, which is currently off-limits due to the hyenas being under quarantine.

They sneak into the hyena house and are spotted by Buffy, Xander and Willow, who decide to follow them, as they are concerned about Lance, the boy who is usually being bullied by the others.

The bullies try to scare Lance by pretending to throw him into one of the cages but Xander intervenes. There is a magical symbol painted on the floor and during the altercation, a magical force seems to go through all the teens as well as through the hyenas as everyone’s eyes turn momentarily green. Everyone except Lance. The group turn eerily toward him and all start laughing menacingly.

At the Bronze, Buffy and Willow talk about Willow’s massive crush she has on Xander. Buffy admits she has feelings for Angel. When Xander joins them, he is acting differently. Kyle and his friends (the bullies from the zoo) arrive soon after and seem to have a newfound affinity with Xander. The girls are confused but can’t quite place what’s changed with Xander.

The next day at school, cut to the library where Giles is helping Buffy train. He struggles to keep up. Later on in the school hallway, Buffy catches the school mascot, Herbert the pig, which is running amock. She hands him back to principle Flutie.

Outside in the schoolyard, Willow is trying to help Xander study geometry, he seems to be more grumpy about it than usual. He leaves in a huff. As he walks past Buffy and Herbert who reacts as Xander walks past them, obviously distressed and scared of Xander.

Later on during dodgeball, Xander and the 4 bullies are very aggressive on the court, even towards Willow, but oddly they seem to leave Buffy alone. After class, Xander publically tells Willow he wants nothing to do with her, all his new friends laugh along with him.

The group go outside and force a bunch of students to hand over their lunch, but spit the food out complaining that the hot dogs are too well done. The continue to stalk through the school and find themselves in the same room as Herbert the pig. They close the blinds and prepare to eat the little pig.

Later Xander eavesdrops on Willow and Buffy, from impossibly far away. The girls talk about Xanders new weird behaviour. Buffy thinks there’s more to it than just normal teenage boy stuff. When she shares her concerns with Giles, he doesn’t agree with her. Giles tells her that boys can be cruel, they tease, they prey on the weak. This sparks a memory Buffy has of a conversation at the zoo about the way Hyenas behave.

Giles keeps dismissing Buffy’s concerns until the news of Herbert’s death reaches them. He hits the books for research.

Principle Flutie confronts the 4 bullies and takes them to his office. Meanwhile, the rest of the Scooby gang discover an African sect of animal worshippers that draws the spirits of predatory animals into themselves, thus becoming possessed by the animals. Buffy leaves to find Xander and once alone, he attacks her, trying to romance her in an aggressive animalistic way. He also inadvertently confesses his feelings for her. She knocks him out and drags his unconscious body to the library where they lock him in a book cage.

The rest of the group are with principle Flutie and after playing around with him for a bit, they kill and eat him.

The teachers are informed of principle Flutie’s death and Buffy leaves to find the rest of the pack, Giles goes to find the zookeeper to try to find the details of the ritual required to reverse the effects of the animal possession and Willow stays behind to keep an eye on the unconscious Xander.

Xander gains consciousness and tries to trick Willow into unlocking the cage. She doesn’t fall for his tricks, knowing it’s the Hyena spirit in control.

The pack return to the library to retrieve Xander. Buffy reaches Willow in time to save her. She then leads the pack back to the zoo and the Hyena cage.

Willow and Giles meet the zookeeper at the Hyena cage, where Giles realizes that the zookeeper had already drawn the original sacred circle, which is needed to do the trans possession, as the zookeeper was trying to take the Hyena power for himself. He was unable to complete the ritual, as the text is difficult to translate, he missed the step of a violent act, which the teens inadvertently did when they were bullying Lance at the start of the episode. The zookeeper starts the ritual as Buffy and the pack arrive. The ritual is successful, but Xander, who is now back to his normal self stops the zookeeper from killing Willow and Buffy throws him into the cage with the Hyenas, during their fight. The Hyenas eat him up.

The next day at school, the girls catch Xander up on what he did while possessed. Giles takes Xander aside questioning his supposed memory loss which it turns out, is faked.

No vampires appear in this episode.

This is the first time the Scooby gang come across possession.

This is the first time one of the Scooby gang is locked in the cage, in the library.

This is one of Joss Whedon’s favourite episodes (as it happens, it’s a personal favourite of mine as well, even though Xander is my least favourite character).

This is the first time, but definitely not the last, that one of the main characters goes bad.