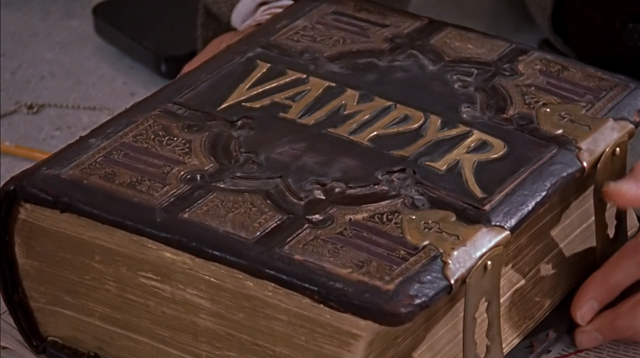 And honey? Try not to get kicked out?

From the library. Where the books live.

Well you’re certainly a font of nothing.

Why? I mean hi. Did you want me to move?

Not much goes on in a one Starbucks town like Sunnydale.

We wanted to welcome you, make you feel like home. Unless you have a scary home.

Don’t you have an elsewhere to be?

To make you a vampire, they have to suck your blood and then you have to suck their blood. It’s like a whole big sucking thing. Mostly, they’re just going to kill you.

A slayer slays, a watcher…

You’re like a text book with arms. I know this.

It’s carbon dated. Trust me, only someone living underground for 10 years would think that was still the look.

Why, do you need to attack her with a stick?

I got hungry along the way.

Okay first of all, what’s with the outfit? Live in the now, okay. You look like DeBarge.

You had to come here. You couldn’t go suck on some other town.

The first episode starts off showing us a vampire who lures a young teenage boy to the school and kills him. We then meet Buffy Summers and her mother Joyce Summers. Buffy and Joyce had to move from Los Angeles as Buffy got kicked out of her last school, for burning down the school gym.

We meet Xander Harris, Jesse McNally and Willow Rosenburg, who are three outcasts in Sunnydale high, but whom Buffy befriends.

Cordelia Chase is the highschool’s most popular mean girl, who relishes in picking on the trio.

Buffy has a run in with the mysterious tall, dark and handsome stranger, who warns her of upcoming danger, specifically something called the harvest and the mouth of hell. His name is Angel, he seems to genuinely want to help her and there is definite chemistry between them.

Buffy meets her new watcher, Ruper Giles. A watcher helps a slayer hone her abilities, trains her to fight the forces of evil. He also works as the school librarian. He spends most of the first episode trying to convince Buffy that she needs to take up her calling and fight the evil forces in Sunnydale. Buffy is reluctant as this fight is what cost her her previous life in Los Angeles.

We get to meet the Master, a very old and powerful vamipre who lives beneath the town of Sunnydale in the sewers. He has plenty of vampire minions around him.

Willow and Jesse get abducted by some vampires, wanting to offer them to their Master. Buffy encounters a very strong vampire called while trying to save them. The episode ends with Luke having Buffy pinned down and is about to bite her.

The original pilot episode, which I believe was shot the year before, but was unaired, had Stephen Tobolowsky as principle Flutie and Riff Regan as Willow. Now, I love Stephen Tobolowsky and even though I do think he would have made the character his own, I still think Ken Lerner did a good job portraying Flutie.

Riff Regan on the other hand, I don’t think made a good Willow at all. I watched some of the un-aired on YouTube and the whole episode just felt a little off. I’m glad they redid it. Riff Regan just didn’t have the same charisma that Alyson Hannigan has and I feel like she breathed life into Willow right from the start. Hannigan showed Willow’s shy but funny side. She just seemed a lot more comfortable in the role than Riff Regan did.