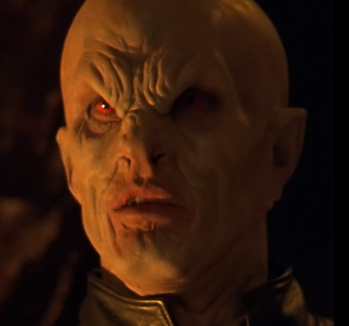 For as long as there have been vampires there has been the Slayer. One girl in all the world, the chosen one.

He loves doing this part.

Alright. The Slayer hunts vampires. Buffy is the Slayer. Don’t tell anyone.

I thought you nothing more than a meal, boy. Congratulations you’ve just been upgraded. To bait.

Um well in a way. I sort of stumbled onto them when I accidentally decrypted the city councils security system.

Buffy, I’m not anxious to go into a dark place full of monsters. But I do want to help.

I’m a bit fuzzy however on the details. It may be that you may wrestle some information from that dread machine. That was a bit um, British wasn’t it.

Well if this harvest thing is such a suck fest, why don’t you stop it?

No, we’re going to the other cool place, in Sunnydale.

Why do we have to devise these programs? Isn’t that what nerds are for?

Excuse me? Who gave you permission to exist? Do I hone in on your private discussions? No. Why? Because you’re boring.

Willow tells Cordelia to hit ‘Deliver’ when she’s trying to save her long, tedious coding and she hits ‘Delete’ on the keyboard and loses all her work.

Hello, miss motor mouth, can I get a sentence finished?

They’re all for the master.

There’s something you forgot about too. Sunrise.

Maybe you could blow something up. They’re really strict about that.

The earth is doomed.

This episode starts off where the first one ended, Buffy trapped by Luke who is about to bite her. She gets away from him, thanks to the cross that Angel gave her in the first episode. She runs off and saves Willow and Xander from the vampires attacking them. The other vampires get away with Jesse.

Back at the library, Giles explains the origins of the world and vampires, to Xander and Willow. They go over Buffy’s role as the Slayer and explain that she is the only one strong enough to take on the forces of darkness.

Jesse gets taken to the Master, who is told about their encounter with the Slayer. He decides to use Jesse as bait to get Buffy to go down to the sewers to rescue him.

Xander feels useless in helping find Jesse, as Willow helps Giles using the PC to find blueprints of the sewer systems. He then decides to follow Buffy down the sewers. They find Jesse, who has already been turned into a vampire and they almost get over run by the rest of the vampires, but Xander manages to pull Buffy out of the manhole just in time.

The is reference of the harvest throughout the episode, by the Master and his vampires as well as by Angel.

Willow and Giles’s research lead them to discover the history of Sunnydale and how it is located above a . The is a portal between earth and the demon dimension. The Master got stuck underground in a big earthquake 60 years earlier and needs to perform the Harvest to gain enough power to be able to escape.

Luke becomes the Master’s vessel and every person he drains will give the Master more of the power he needs. The vampires go to the Bronze, as there are a lot of young people to feed on. The gang go to the Bronze to fight the .

Xander encounters Jesse and accidentally stakes him while in a stand off. Buffy kills Luke and chases off the rest of the vampires.

Earlier in the episode Buffy was caught by principle Flutie, while trying to leave campus during school. Buffy’s mom received a phone call from him and later confronts Buffy, as she is preparing to leave for the Bronze. This is the first of many times that Buffy will need to sneak out to carry out her Slayer duties.

The next day at school everyone pretends like what happened at the Bronze was gang related. No one acknowledges the supernatural beings they witnessed.

The Masters name is Heinrich Joseph Nest. This name is never revealed in the series, but is found on the scripts.

The character Harmony Kendall is introduced in this episode. Harmony is one of the mean girls in Cordelia’s group of friends. Harmony who is played by Mercedes is the only cast member who is actually the age of a teenager.

It is unusual for the Slayer to work with anyone, other than her watcher. Even the watchers don’t usually partake in the battles. In this episode we see Buffy’s friends and watcher, not only help but join in on the fight. This was the official formation of the scooby gang.

The end scene, where the gang stand in the schoolyard, with Giles saying ‘The earth is doomed’, and the guys being very blasé, is also how the series eventually ends… with the scene almost completely replicated.