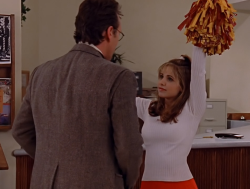 I make allowances for your youth, but I expect a certain amount of responsibility but instead you enslave yourself to this, this… cult.

You have a sacred birthright, Buffy. You were chosen to destroy vampires, not to wave pompoms at people. And as the watcher, I forbid it.

And you’ll be stopping me how?

By appealing to your common sense, if such a creature exists.

I know you don’t. That’s because you’re my friend, you’re my Xander shaped friend.

Guess what? I feel better.

Xander, what are you doing?

Get your hands off of her.

I’ve been doing a lot of thinking about where you’re coming from, how to relate to you. And I’ve come to a very simple conclusion. I don’t get it.

Well I know that I’ll miss the intellectual thrill of spelling out words with my arms.

Buffy tries to join the cheerleading team, as she to be a cheerleader when she was in school in Los Angeles. Giles was very upset about this as the Slayer needs all her attention focused on training and fighting the forces of evil. He tries to forbid her, but ultimately realizes he can’t stop her.

The cheer leading tryouts starts with a cheerleader catching fire while doing her routine. The gang research spontaneously combustion but don’t find anything useful.

Buffy’s mom makes an offhanded comment about how Buffy isn’t in trouble at school yet. We see the strain that their relationship has been put under and how they don’t spend much time together, as Joyce is a single working mother. Joyce struggles to connect with her daughter.

We find out how Amy’s mother was a popular cheerleader when she was in school and Amy struggles to live up to her, as she’s not a very good cheerleader. Amy’s fumbling during tryouts causes her to knock over Cordelia, which earns her Cordelia’s wrath.

Buffy and Amy are the first and third alternates for the team. Amy takes this really hard, ignoring Buffy’s attempt at consoling her.

We see snippets of a witch casting spells.

Xander pines after Buffy and we see how Willow struggles to hide her disappointment at his affections for Buffy.

Cordelia is struck blind while attempting a driving class. Buffy saves her from being run over.

Giles realizes this is due to witchcraft, the gang tries to figure out who the witch could be. They land upon Amy, thinking she is so focused on pleasing her mother, she would do anything. They do a test during a chemistry class to determine whether she’s cast a spell recently, which comes up positive. We see the first real teamwork between Buffy and her new friends, as they help her fight evil.

Buffy is Amy’s next target. The spell that is cast on her makes her super hyper, with her super Slayer strength makes her a hazard during cheer leading practice. She gets kicked off the team (at this point she was let on as another cheer leader went down from the spells and Buffy takes her place) and Amy takes her place as the next alternate.

Buffy starts to get weak. Giles determines she is under a bloodstone vengeance spell which is going to eventually going to kill her. Buffy and Giles decide to go to Amy’s house, needing to find Amy’s spell book in order to reverse all her magic. We come to learn that Amy isn’t Amy at all, her mother, who is a practicing witch, cast a body switching spell on her daughter. She had intended to relive her high school life as a cheerleader, not accounting for the fact that she can’t make Amy’s body move the way she did as a teenager cheerleader.

Back at the school, Giles casts the spell required to reverse all of the witches curses. Amy’s mother (still in Amy’s body) becomes aggressive and hostile and attacks the gang, we see the magnitude of her potential power. Giles’ spell casting is luckily completed just before the witch tries to stop them and Buffy takes her on.

In one last attempt to defeat Buffy, the witch casts her final spell which backfires onto her as Buffy deflects it using a mirror. No one knows what happens to Amy’s mother after that, as she just vanishes.

This is the first episode where we encounter witchcraft. It later becomes an integral part of the core storyline. It also only shows the of Black Magic.

This is the first appearance of Amy Madison.

Charisma Carpenter was a cheerleader for the San Diego Chargers in 1991.

During Buffy’s meltdown, while cursed, she acts erratically. She almost blurts out about Amy being a witch, her super strength making her dangerous. If it were not for Buffy’s friends, Willow and Xander, she could have gotten herself into a lot of trouble, making the adults around her think she’s crazy. This is the first of many times that her friends save her and thus ensuring she can have a normal life alongside her Slayer duties.

This is the first episode that isn’t written by Joss Whedon. He only wrote 26 of the 144 episodes during the shows 7 seasons.

This is the first body switching episode. The body switching ones are great because you really get to see the talent behind these amazing actors. There are still lots more to come!

No vampires appear in this episode.